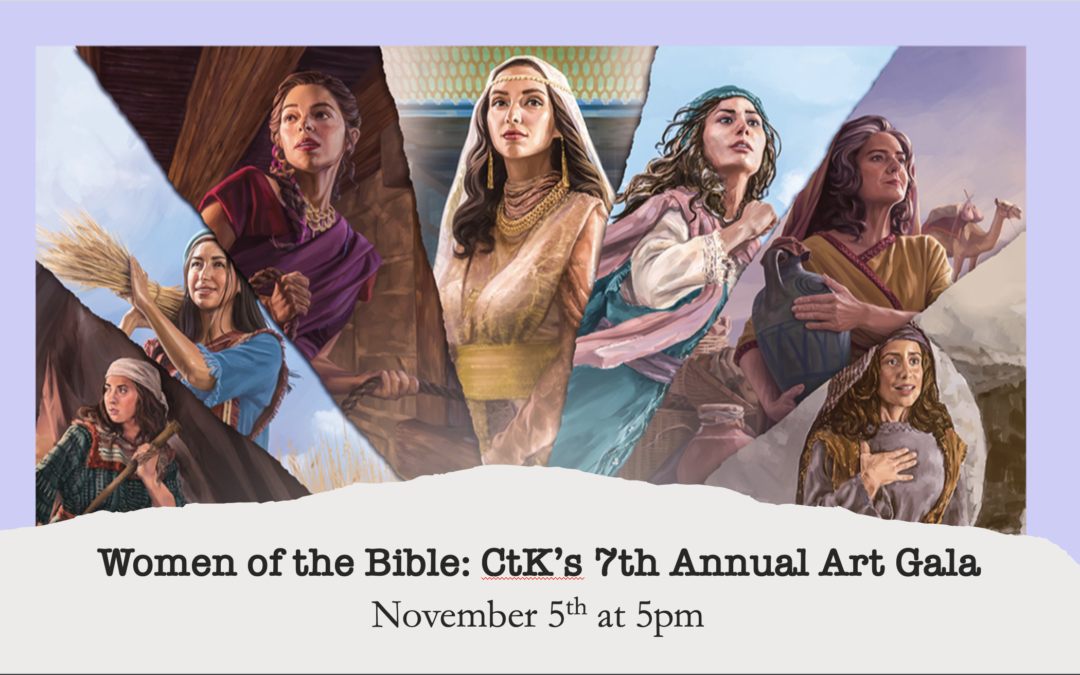 The Youth got REALLY creative with their Art Gala Project, and to appreciate it in its entirety, you need to be familiar with Twitter. And a bunch of Biblical women.

Twitter is a social media site, and its primary purpose is to connect people and allow people to share their thoughts with a big audience. The art project begins in a particular Biblical woman’s Twitter profile (it’s a great read). You’ll see a tweet from her and the attention (good and not-so-good) that the tweet garners.

Hashtags begin with the pound symbol and are followed by a keyword. Hashtags are a great way to tap into conversations happening on Twitter. You’ll find a very popular hashtag in the art project, along with some others that flesh out the other people responing to the thread.

A thread is a series of connected Tweets that allows you to provide additional information about the same Tweet. You’ll see lots of Biblical Women responding and retweeting in the project.

Who are the characters in the project?

Without giving too much away, you should be familiar with the Bathsheba/King David story and a few other Biblical women.

Bathsheba was married to Uriah, one of King David’s generals. While she was bathing, David saw her and was overcome with lust. David was the king and no woman in his kingdom would have the power or authority to deny his sexual advances. David further abuses his regal power to cover up his adulterous rape and its ensuing pregnancy by having Bathsheba’s husband murdered in cold blood. Ultimately, David is held accountable for his sin. In their art project, the Youth imagine that the modern Twitterverse, rather than the prophet Nathan, is how David is held accountable.

Susanna: A beautiful Hebrew wife named Susanna was falsely accused by lecherous voyeurs. As she bathes alone in her garden, two elders spy on her and lust for her. When she makes her way back to her house, they accost her, demanding she have sexual intercourse with them. When she refuses, they have her arrested, claiming that the reason she sent her maids away was to be alone as she was having intercourse with a young man under a tree. She refuses to be blackmailed, is arrested, and is about to be put to death for adultery when the young Daniel interrupts the proceedings, shouting that the elders should be questioned to prevent the death of an innocent. After being separated, the two men are cross-examined about details of what they saw, but since they are lying, they disagree about the tree under which Susanna supposedly met her lover. The false accusers are put to death, and virtue triumphs.

Tamar: Tamar was married to Judah’s eldest Son, Er, who God deemed wicked and killed. Because of the law of Levirate marriage, Judah gave his next eldest son to be Tamar’s husband. But he did wrong in the sight of God as well, so God killed him, too. Judah now thought Tamar was the one causing all this – it couldn’t possibly be because his sons were awful people – so Judah refuses to give his youngest son to Tamar in marriage. This is very bad for Tamar – it basically ends her purpose in life, to have children. So she disguises herslf under a veil and pretends to be a sex worker and Judah himself sleeps with her. As “payment” for her services, Tamar demands Judah’s staff and signet and cord. Smart thinking, because when she turns up pregnant – with twins – Judah wants her burned to death. But when Tamar produces Judah’s own belongings as proof that she didn’t stray from the family, Judah acknowledges  that “She is more in the right than I, since I did not give her to my son Shelah.”

Deborah: According to the Book of Judges, Deborah was a prophetess of the God of the Israelites, the fourth Judge of pre-monarchic Israel and the only female judge mentioned in the Bible.

Thecla: Thecla is a first-century noblewoman of Iconium (in modern Turkey). When she hears Paul preach in her hometown, she is so absorbed in his message that she neither eats nor drinks for three days. She promptly becomes a Christian and decides to remain unmarried and celibate, as Paul advised. Unfortunately, this is seen as a subversive act by her fiancé and her family, and Thecla is violently persecuted by being burned in a bonfire. Miraculously, the flames do not touch her, and she is spared. After this close brush with death, she leaves Iconium and follows the Apostle Paul to Antioch. There, Alexander, one of the city’s leaders, desires Thecla. When she rejects him, Alexander hauls her in front of the governor, who sentences her to be thrown to wild beasts in an arena. Again, she miraculously survives this persecution—and emerges from the arena unharmed. After her second miraculous deliverance, Thecla is freed, and she goes in search of the Apostle Paul once more. When she encounters him in Myra, he commissions her to spread the Gospel of Christianity, teach the Bible, and even baptize converts. Paul seems to be the only man in Thecla’s life who doesn’t objectify her, but sees her as an ally in evangelism.

Eve: We figure you know all about her. We also imagine she’s a bit sick of taking all the blame, btw.

Judith: A daring and beautiful widow, Judith is upset with her Jewish countrymen for not trusting God to deliver them from their foreign conquerors. She goes with her loyal maid to the camp of the enemy general, Holofernes, with whom she slowly ingratiates herself, promising him information on the Israelites. Gaining his trust, she is allowed access to his tent one night as he lies in a drunken stupor. She decapitates him, then takes his head back to her fearful countrymen. The Assyrians, having lost their leader, disperse, and Israel is saved. Though she is courted by many, Judith remains unmarried for the rest of her life.

Sophia: Sophia appears in many passages of the Bible as the female personification of wisdom. As such, she gets the last word in the imagined Twitter thread.

See you at the Art Gala!